The AMX-10 PAC 90 is a dedicated fire support and anti-tank variant of the AMX-10P infantry fighting vehicle. Its production commenced in 1979. This vehicle is in service with France, Brazil and possibly some other countries.
This fire support vehicle was designed to operate alongside the main battle tanks and infantry fighting vehicles. At the time of its introduction it was capable of taking anti-tank combat, however by current standards its armament its too week to knock out a modern MBT. It was also intended as a reconnaissance and infantry support vehicle.
Διαβάστε περισσότερα »
Αναρτήθηκε από Χρήστος Βούλγαρης στις 5:05 μ.μ. Δεν υπάρχουν σχόλια:

The AMX-10P is a French infantry fighting vehicle. It was developed after 1965 to replace the AMX-VCI in French service; the first prototypes were completed in 1968. It has NBC protection and amphibious capabilities, with hydro jets to swim in water. The AMX-10P has been operated in the past by France, the United Arab Emirates, Greece, Indonesia, Qatar, Saudi Arabia, Singapore and Mexico. 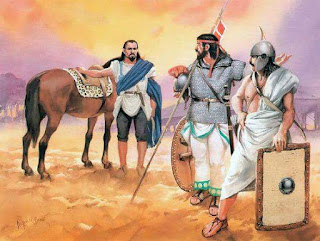 "In 941 the entire Arab tribe of Banu H'abid, discontented apparently with the (ruling) Hamdanids, emigrated from the region of Nisibis in Mesopotamia and came to settle in the Byzantine Empire. The new arrivals numbered 12,000 horsemen and brought with them, besides their families,  their slaves, flocks and all their transportable goods. They were followed, in addition, by many of their neighbors. Once in Byzantine territory, they embraced Christianity, enrolled in the Byzantine army, and in return were given lands, animals, clothes and even some precious objects" -