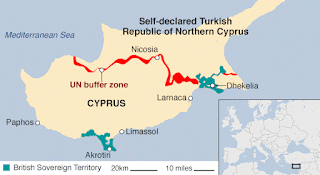 
An experience from the opposite end of Europe might influence Scotland's bid to remain in the EU during the UK's Brexit negotiations.
Cyprus joined the EU in 2004. Yet the island's breakaway, Turkish-controlled north is not internationally recognised, and EU laws don't apply there.
The UK's sovereign military bases in Cyprus are also outside the EU and have a special status.
The EU showed flexibility for Cyprus. It might do the same for Scotland and Northern Ireland, where majorities voted Remain (62% and 55.8%, respectively).